Cowboys and their horses.....

Mobuck said:
"Ben Cartwright' didn't like horses. The only horse he'd ride in the 'Bonanza' TV show production just happened to be the same buckskin that 'Matt Dillon' rode in the glory years of Gunsmoke. Maybe true/ maybe not but was a public comment I read somewhere.
Prettiest horse I remember seeing was the bald faced, bleached mane/tail steed that Randolph Scott rode.
Click to expand...

I also coveted that leather jacket that Scott wore in a lot of his westerns.
S

I remember reading how one time Roy Rogers quietly took Trigger up a stairwell in a hospital to visit sick children in the children's ward. That had to be an interesting trick!
I also read that Topper was named by Boyd's wife; the name came from the Topper films of the 1930s.
There's a painting of Pie and Jimmy Stewart done by Henry Fonda. Stewart did not own Pie, but rode him frequently in his 1950's westerns.

Why, sure! Never can get enough trivia!

Trivia is knowledge as well.

Kevin said:
We took a couple family vacations on horse packing trips. One in Wyoming, the other in Montana. One the one through MT, the guide was apparently an alcoholic. (I was probably 10 years old.) But he was also partially blind.

He kept stashes of alcohol in upper mountain streams to stay cold until the next trip.

I had fun, but from what I’m told now as an adult, at the time, it was pretty touch and go if we would have made it back with this guide.

Edited to add: those pack trips made me realize I do not like horses one bit. Not now, not ever.
Click to expand...

A friend took his family on a 5-day horse packing trip. Their guide recommended they all wear panty hose to keep from getting chafed.

BarkeyVA said:
A friend took his family on a 5-day horse packing trip. Their guide recommended they all wear panty hose to keep from getting chafed.
Click to expand...

Great list Kir, I enjoyed going through the whole thing.

Early in his career Louis Lamour was contracted to write Hopalong Casidy novels. He didn’t care for the specific breed or type of horse Topper was.

So he would find an excuse to leave Topper behind somewhere and Hop would use a borrowed horse.
B

Fox Mike said:
That is not actually true. Gunsmoke was filmed at various locations but mostly in California. https://www.looper.com/824563/this-is-where-gunsmoke-was-actually-filmed/
Click to expand...

Interesting. I didn't realize that.
I new it was filmed in other locations , but thought it was primarily in Tucson.
K

Universal cowboy hero Bob Baker rode a paint named Apache in his own series of the late 1930s as well as when he was the second lead to Johnny Mack Brown. Minard Coons knew Baker and adds the following tidbit --- "Bob Baker told me that he sold Apache to Montie Montana. Seems Apache was not a gentle horse and Monte was the only one who could ride him." Walt Weed (Bob Baker's son) and I communicated during December 1999, and Walt confirmed that his dad sold Apache to Montie Montana.

FOLLOWING/Kir:
When I was going to Miramonte Elementary School in L.A., Montie made an appearance on a paint. It was probably Apache. When I talked to Montie Jr. on the phone when he was having lunch in Chico, CA, I asked him about it and he said that his dad owned many horses, but did not remember any paint. Montie Jr. 1934-2013
Looked up images of Montie and found that in most of the pictures he was riding one paint or another.
K 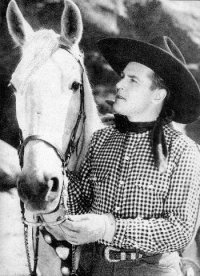 KIR,
Maybe you can help me out on this story.
My Grandfather had a small ranch 30 miles North of Houston that he bought in 1957-58. We moved to Houston in 1962 and I spent time at the ranch taking care of the horses and cattle.
He owned a beautiful Palomino Stallion by the name of Mac that he said had belonged to Johnny Mack Brown at one time and had been ridden in the Rose Bowl Parade on occasion. Mac was a joy to ride, with his high stepping gait, and I rode him often. On occasion we would go to a small close by town where I would tie him up so I could get a beer. In fact I was the only one that rode him. Most were afraid of him due to his size and being a stallion I guess. Mac had not been ridden for a few years until I rode him. Kind of scary getting on him the first time. Besides I made it clear to others to stay off of Mac.
He was a deep gold and when I would bleach out his tail and main he looked outstanding and looked a lot like Trigger.
My Grandfather was a prominent Houston Businessman of the 50s-70s so I believed the Mac Story. What are your thoughts???
Thanks,
Jim
K

Under the Reno Arch During his serials and early western series at Universal, Johnny Mack Brown rode a white steed prior to settling in on a palomino that he named Reno/Rebel. Ron McKnight viewed FLAMING FRONTIERS and notes that Johnny called that white horse Scout in that serial.

Johnny Mack Brown most often rode a white horse during his Universal serials and a palomino in his westerns. As with most everything, there were exceptions. Above is Johnny Mack on a paint in VALLEY OF THE LAWLESS (Supreme, 1936), one of his series for producer A. William Hackel. In his films for Hackel, JMB usually rode a white or a brown hoss. In VALLEY, he loses his brown mount, and about twelve minutes into the film, he shows up ridin' this paint.

The Palomino hoss' original name was Reno, but was changed to Rebel when Johnny Mack was at Monogram in the 1940s. The reason for the name change --- his female co-star in several films at Monogram was Reno Blair (Reno Browne). Brown used several different palominos during his starring career, and in the later Monogram films, you can easily spot the different horse as it is darker. 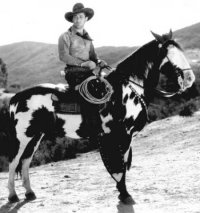 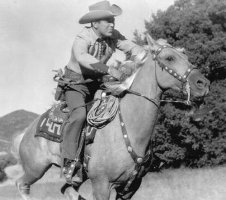