This is a Ruger Firearms enthusiast's forum, but it is in no way affiliated with, nor does it represent Sturm Ruger & Company Inc. of Southport, CT.

A place for pics of your favorite Ruger firearms. There is a tutorial inside giving instructions on how to post pictures.

After talking to good friend Mike Barranti a while back about a special gun project I decided to copy him & have one built myself. I did change mine just a bit but did start with a old model 357 Ruger as the base gun. Next up was a new 5" barrel, cylinder, 2 Dogs great front sight, Bowen target rear sight (thanks Glenn) Belt Mountain base pin, action job, recessed target crown, steel, round grip frame, Turkish walnut stocks & a trigger that breaks like frozen lettuce. The gun was built by Tyler Guns Works & Bobby's crew does an amazing job turning out custom six guns! Matt, his Ace pistol smith worked his magic on my new toy & then actually delivered it because him & his wife Courtney wanted to make a trip west for a little vacation, wow!
The gun is absolutely amazing in every way, I wouldn't change anything about it. Oh, you want to know the caliber... how about a sweet shooting 45 Auto Rim! This little beauty shoots the old Keith #452423 242 gr bullet just fine, thank you! It also does very well with the Miha 223 gr SWC HP & I'm just getting started. Only been shooting it 3-4 days in limited shooting.
I've been busy showing Matt & Courtney around the worlds biggest playground! We shot targets, we've shot ground squirrels, rock chucks, Matt tangled with a Badger but it got in the rocks before he could get a shot. Courtney proved to be the best fisherman as she caught 5 nice trout & one was the biggest fish she had ever caught.
One last thing, Matt Grabbe, besides being a world class pistol smith is also a world class shooter!! I'll have to post the other photo's later & hopefully a couple of videos if I figure it out but he did some amazing shooting with his Ruger 44 special & my Buckeye 32-20, yikes! A sneak preview, how about a Rock Chuck at a lasered 185 yds with my Buckeye 32-20 with one shot. We have it on video. That's David Bradshaw country! Don't mess with Texas!!!! 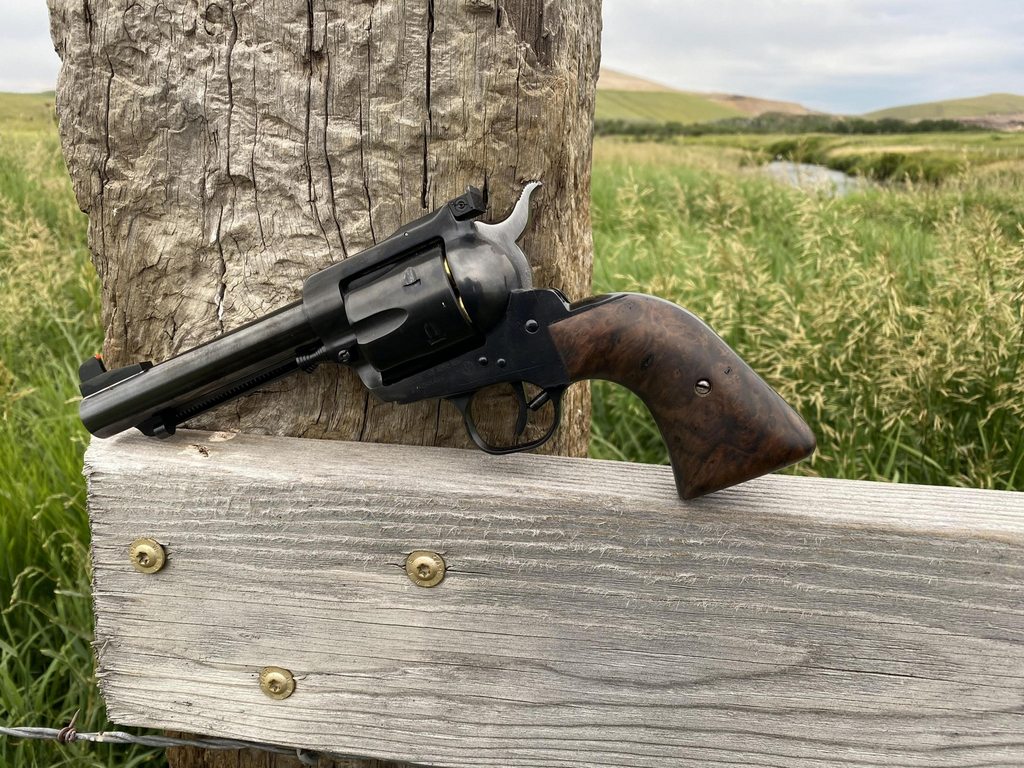 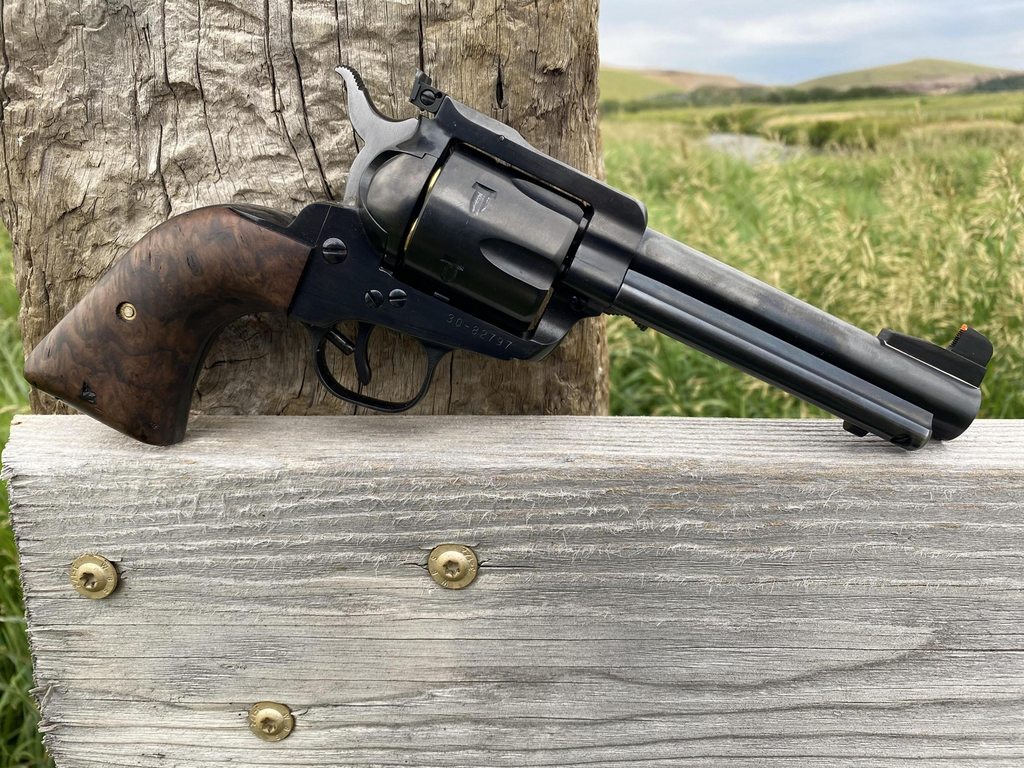 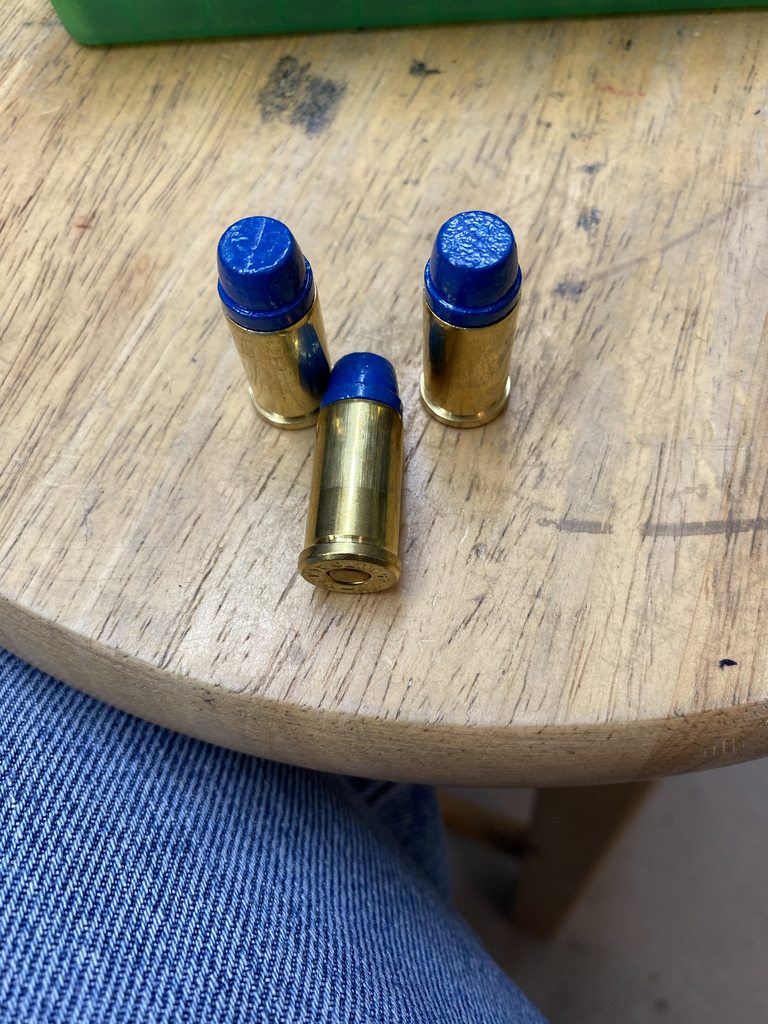 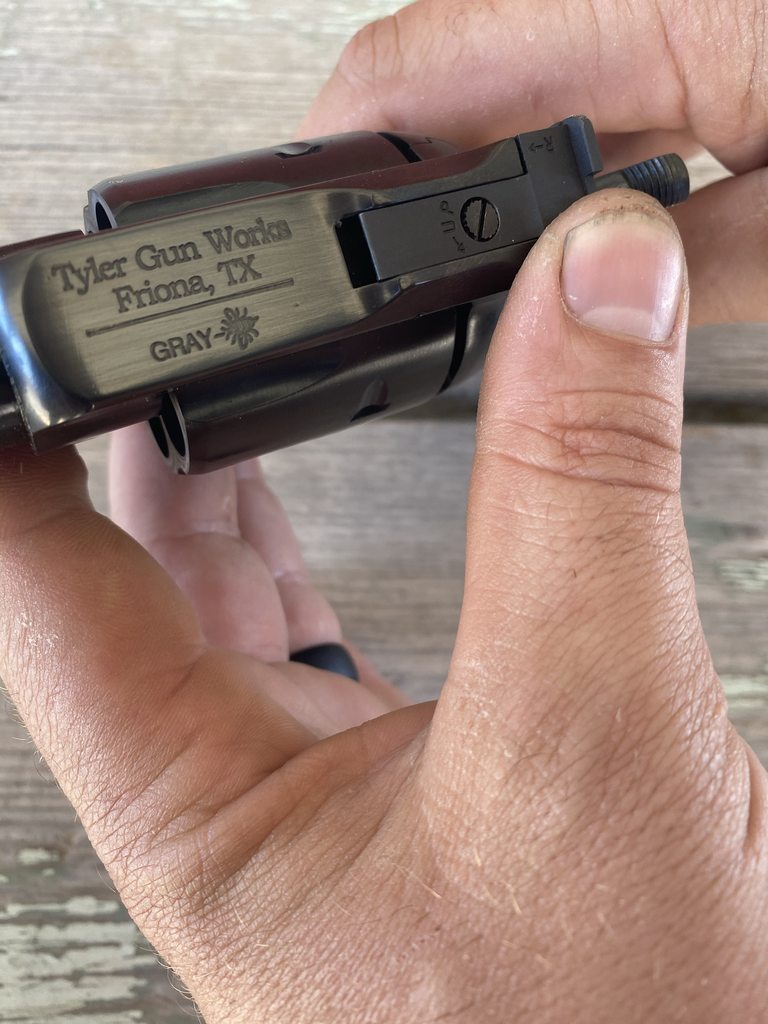 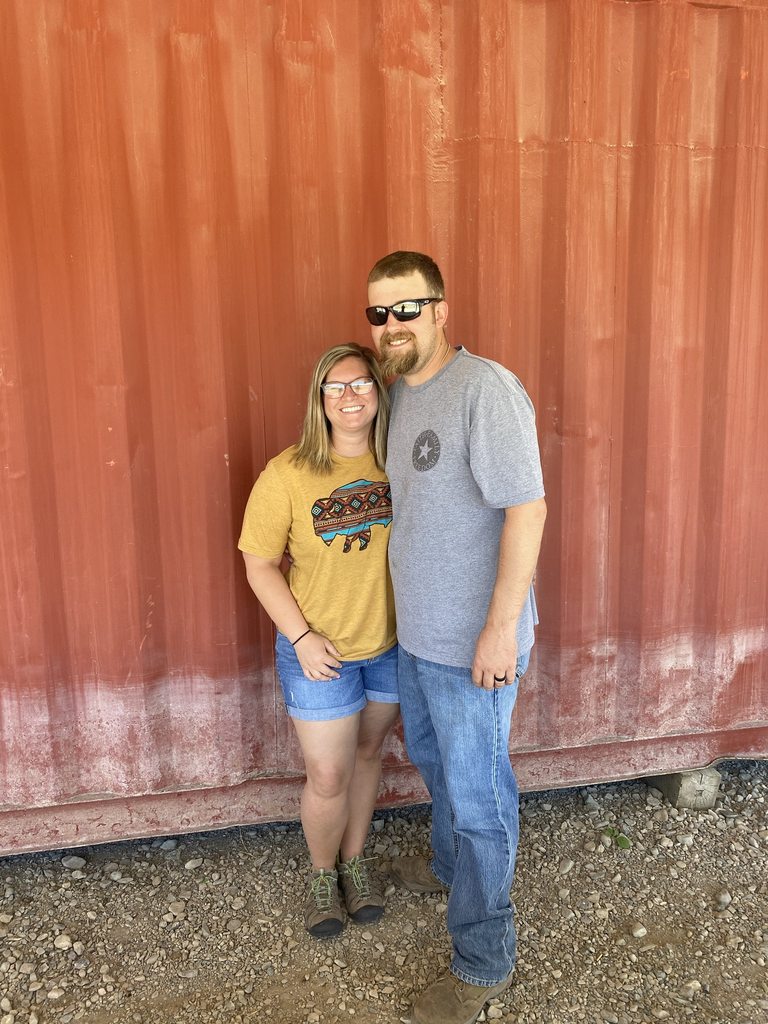 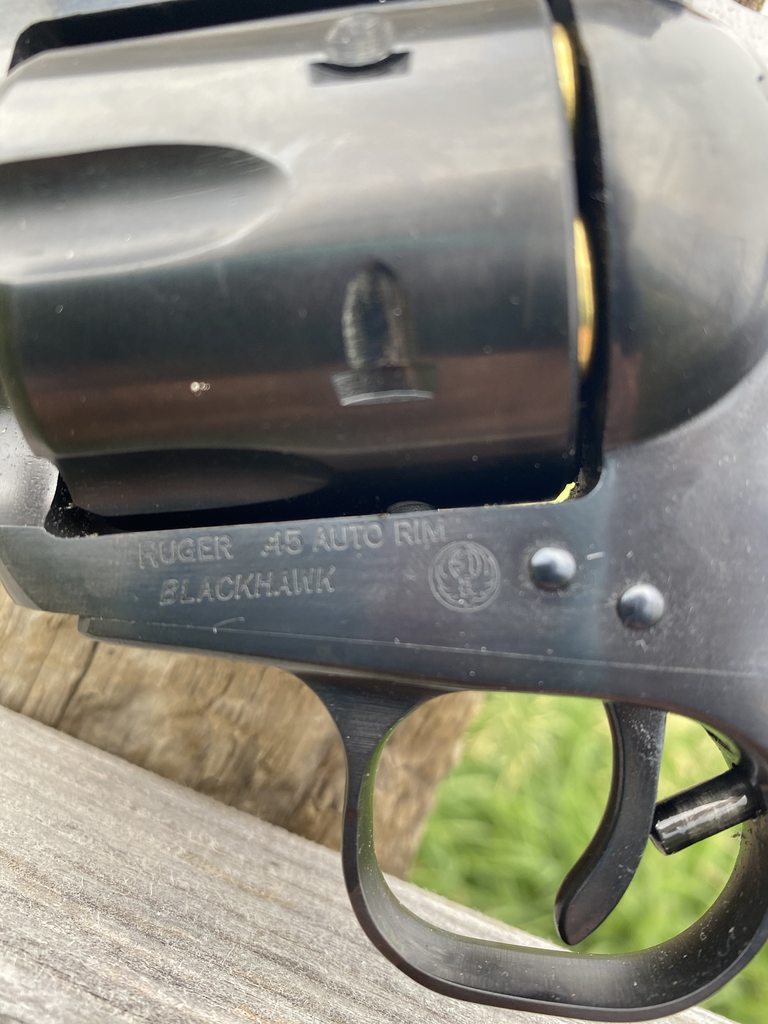 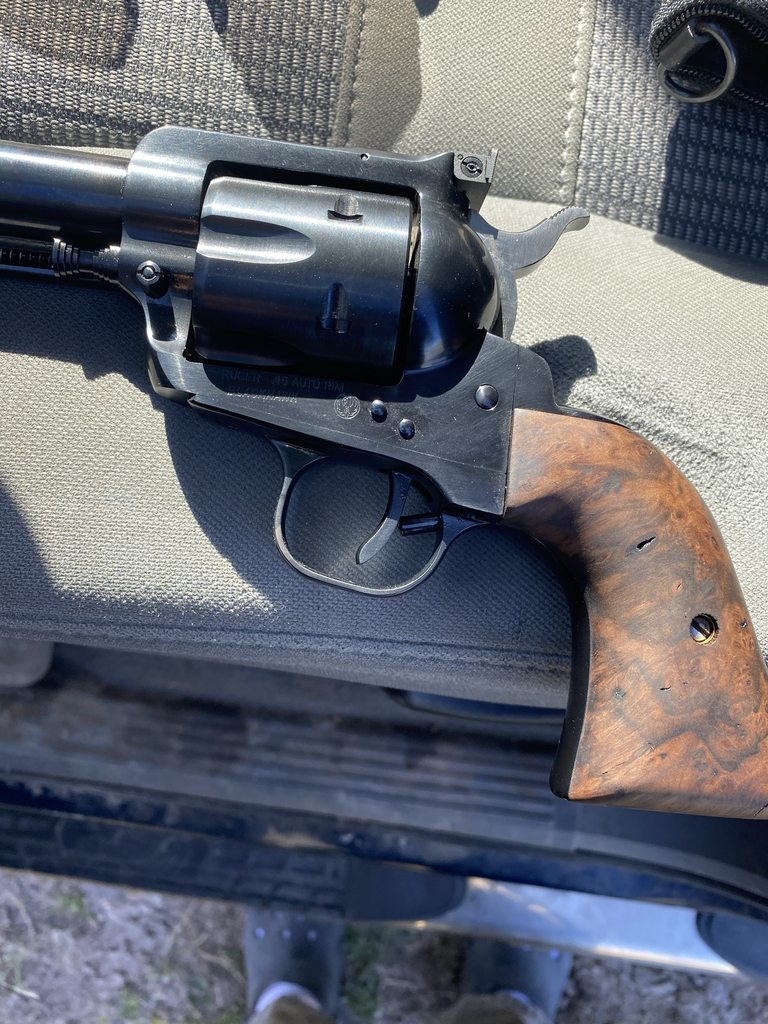 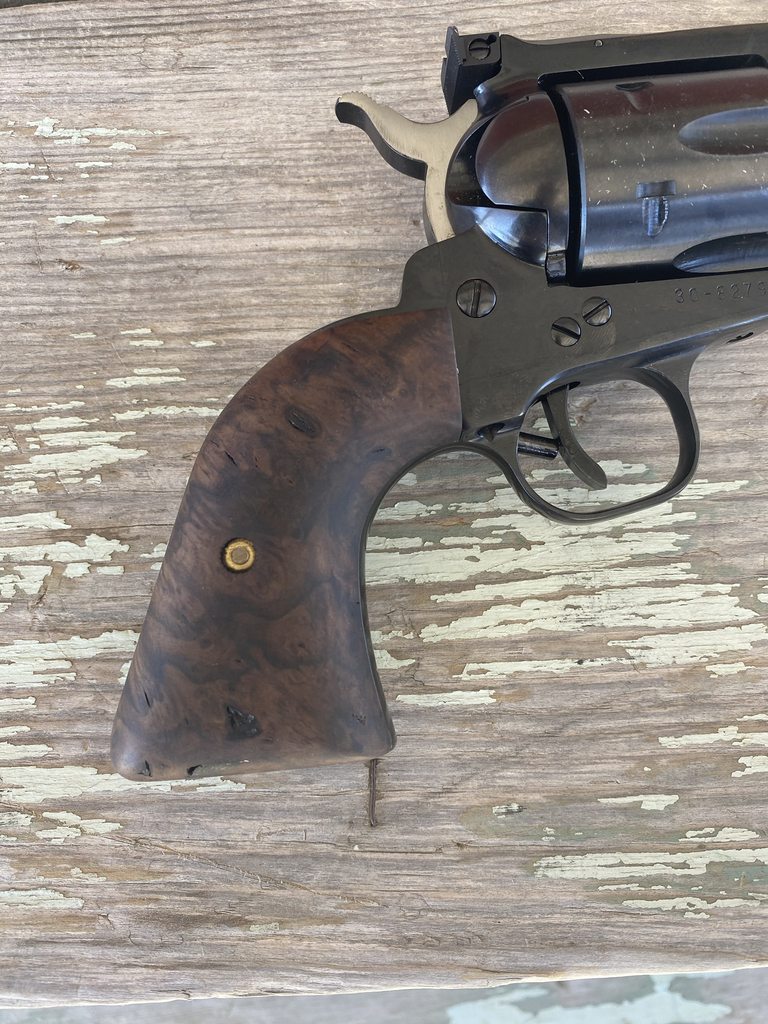 Beautiful Ruger!
Believe you can and you’re halfway there.
Top

Very nice post. I love those grip scales, remind me of an old briar pipe. Kinda friendly like.
Top

Oh, that is a beautiful gun! Great job!
Top

Yes I am trying some Unique & it's doing very well. "And a River Runs Through It" This is one of our honey holes, recently one of my son's & two of his small son's caught & released 69 trout right in this area.
I'm also having good luck with Longshot but lots of testing yet to do. Do not use any of these loads, they are not listed as far as I know. Brian Pearce has many fine loads listed back in a 2017 issue of Handloader magazine for the 45 Auto Rim.
My Keith #452423 drops at 250 grs & is a dandy bullet, I'll show another target later. So far Unique is edging out Longshot but just slightly. I'll also shoot some H110, Matt reported very fine accuracy with it. With only a .002" cylinder gap he was getting only 3 fps extreme spread for 5 shots!! With my old eyes I still get a lot of 4 in and 1 out groups, dang it! 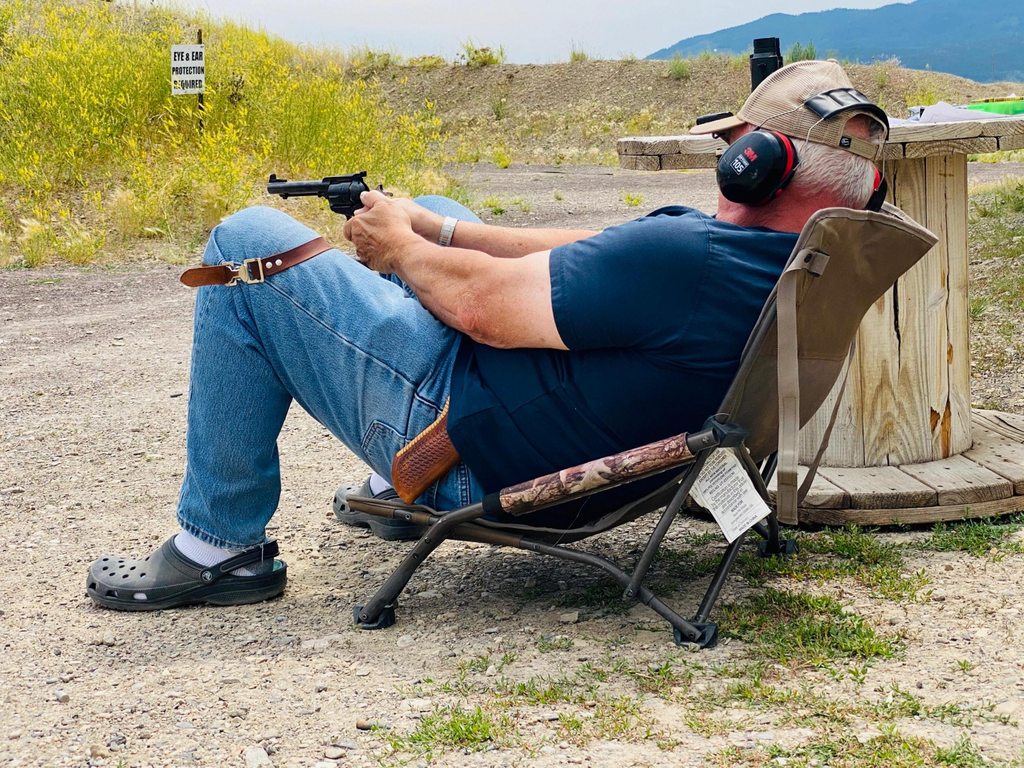 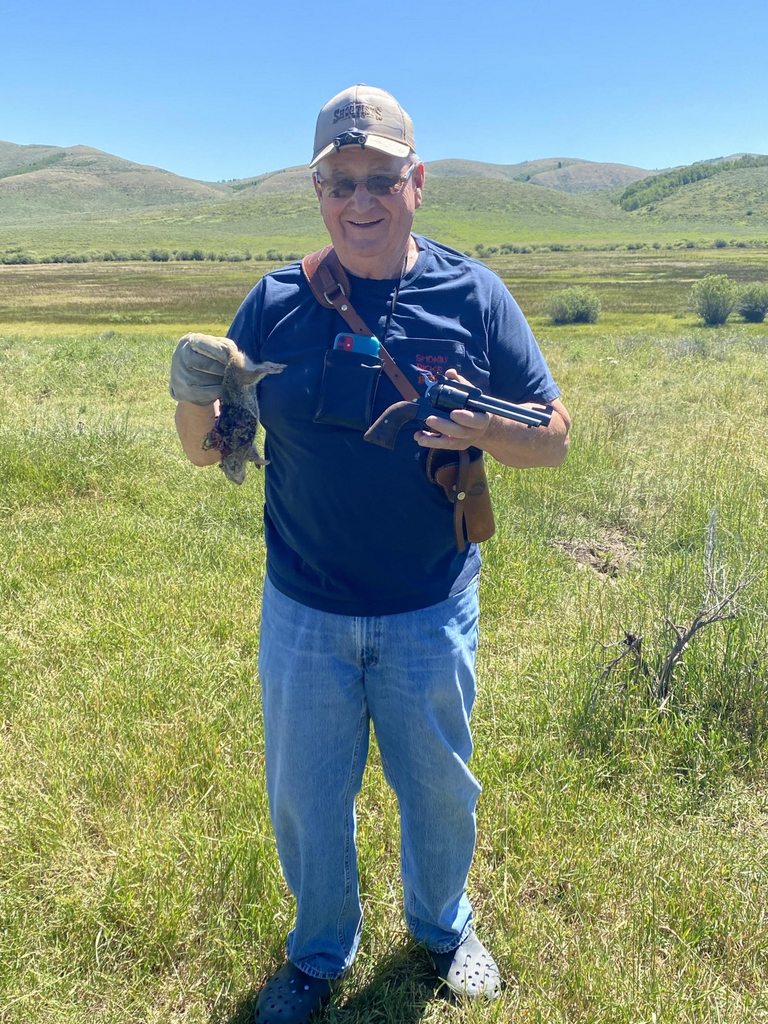 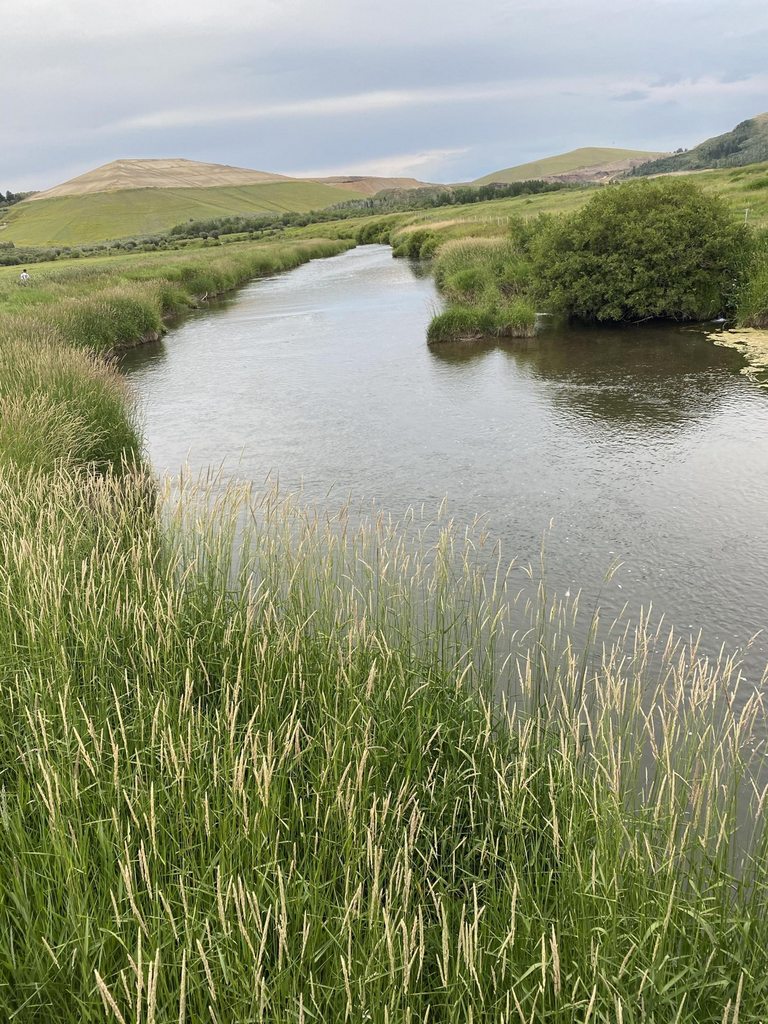 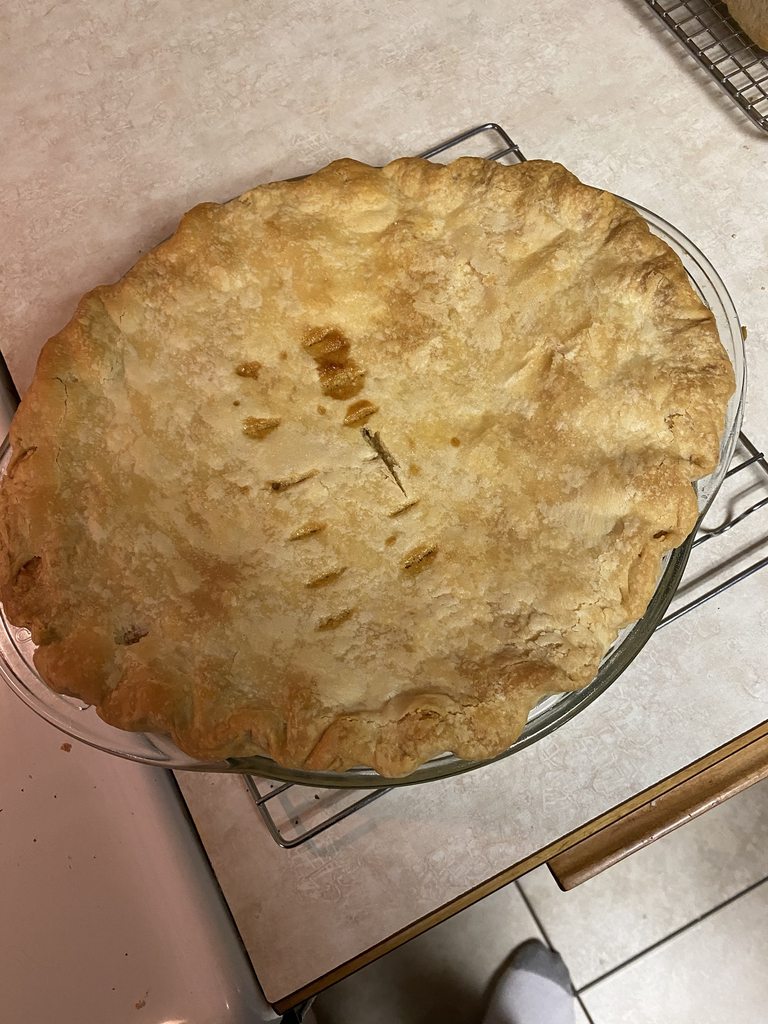 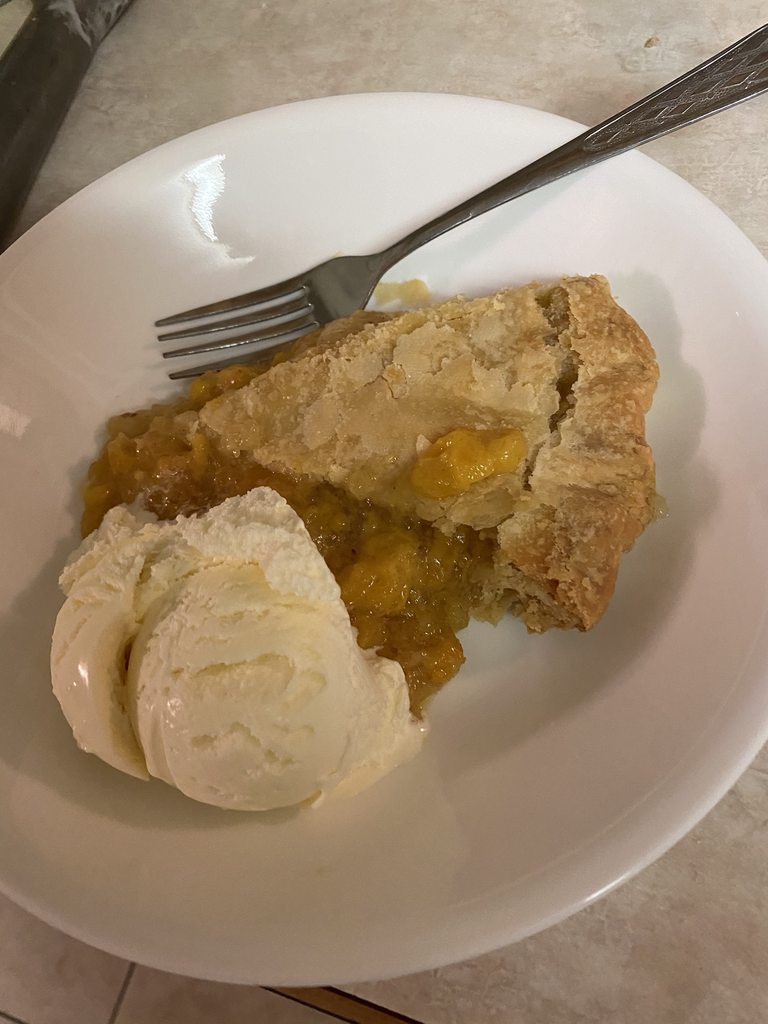 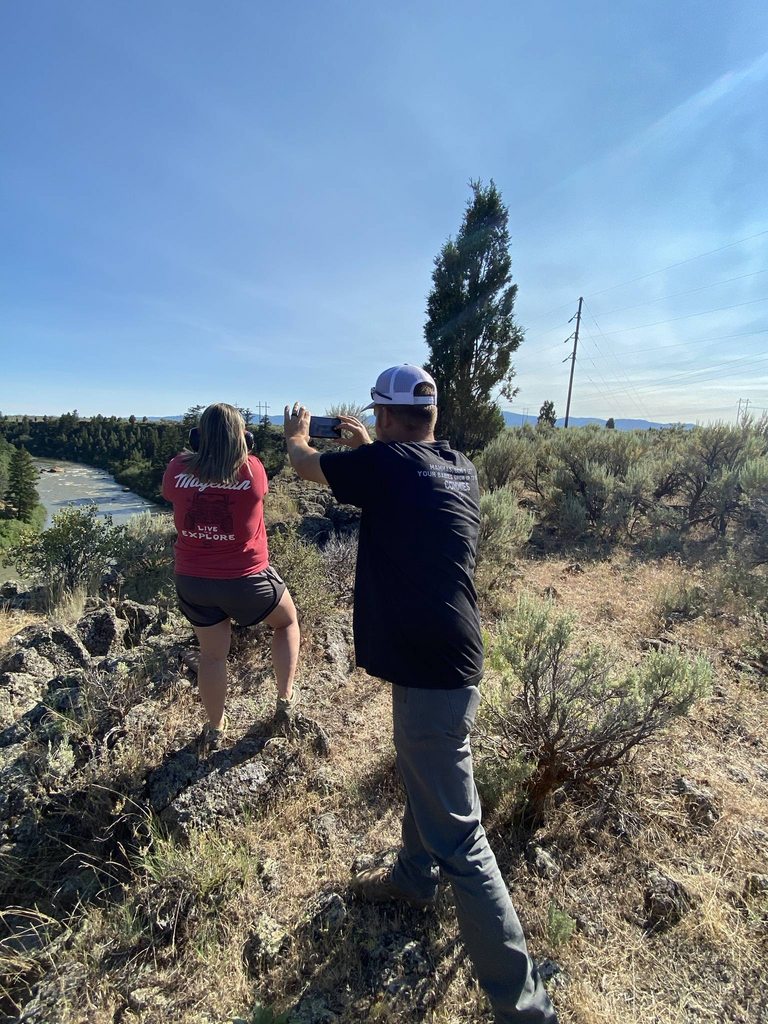 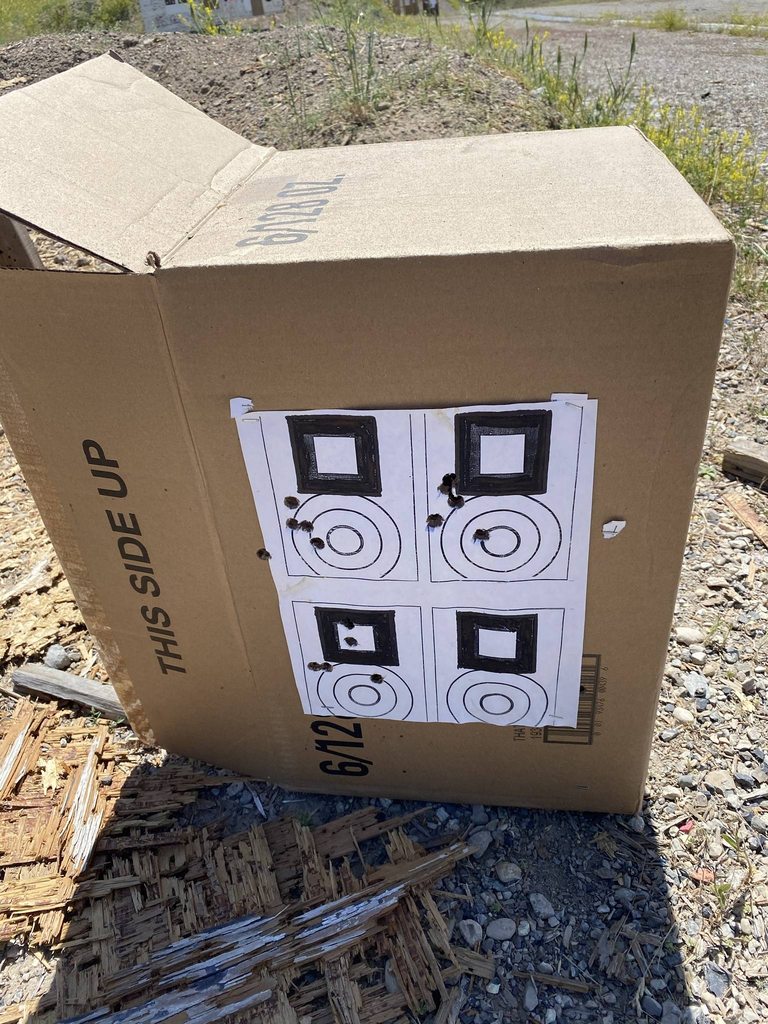 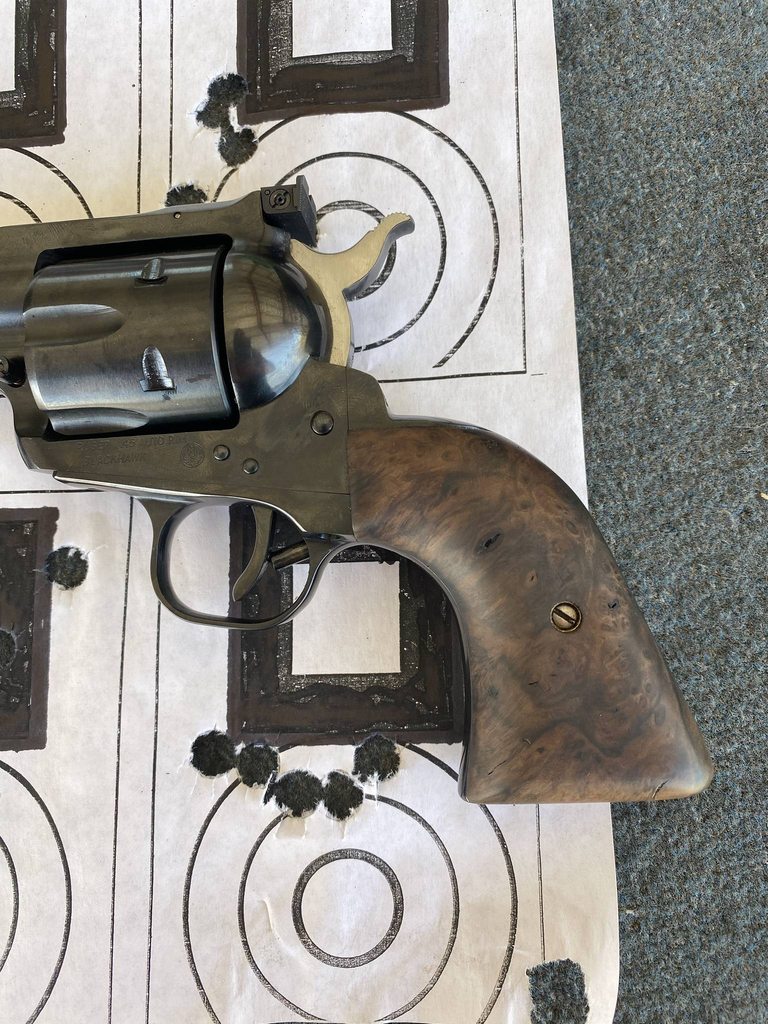 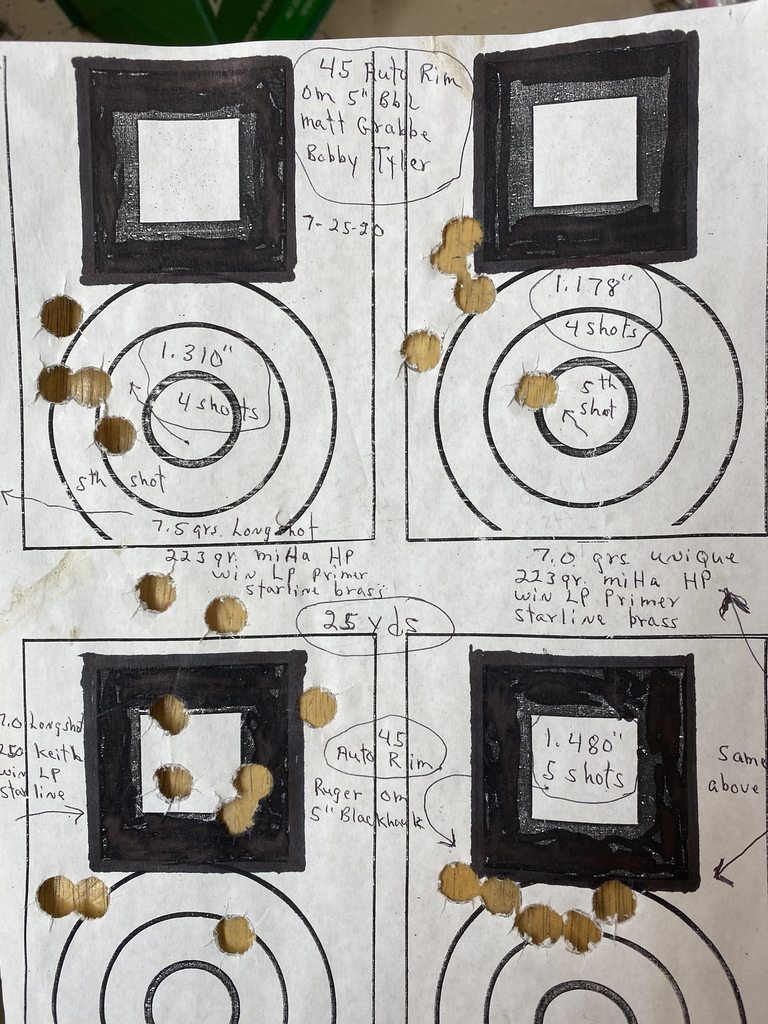 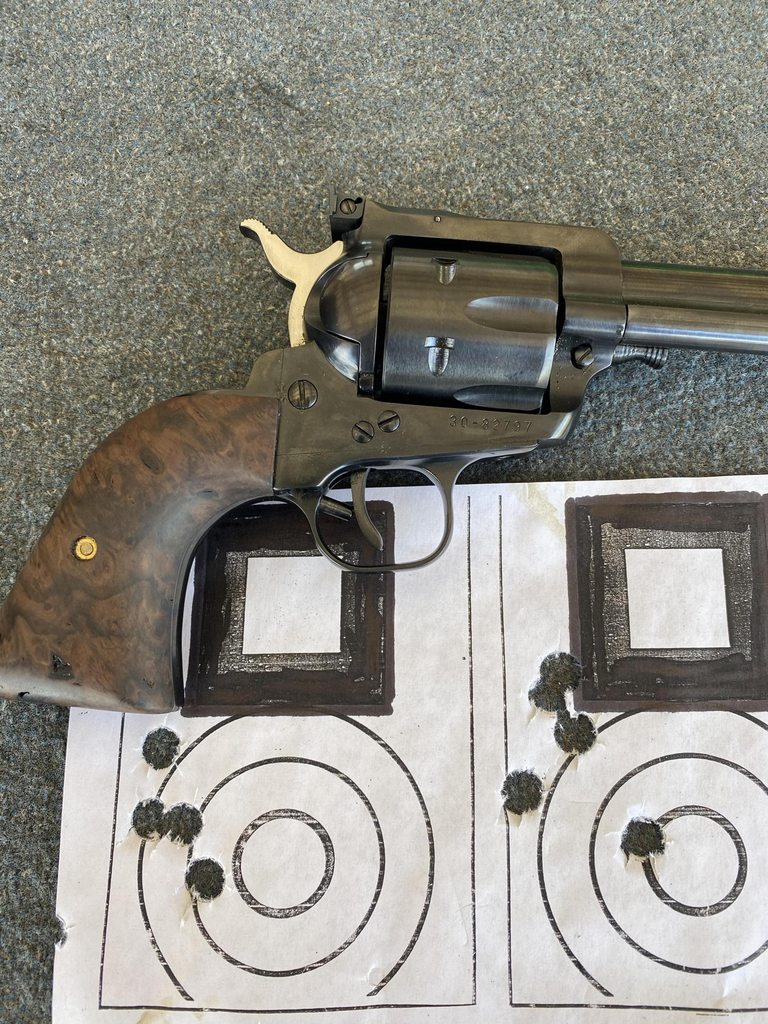 SBH: 44
Dear God, Please bring back Bob Marley, In return you can have Justin Bieber. Amen.

Don't believe everything you read on the Internet. Abraham Lincoln

when a cowboy is too old to set a bad example, he hands out bad advice

Mamas, don't let your Cowboys grow up to babies...
Top

Beautiful!!! Oh what fun!
The more a feller's got on his mind, the less time he's got to think on any one thing. (Festus Haggen)
Top

Just as The Sun Went Down
https://youtu.be/0WLtYgivQsU
Top

I'm glad to see someone else wears Crocs besides me.... I get a lot of abuse for wearing mine.

You know how to live Dick.

Return to “The Gallery”